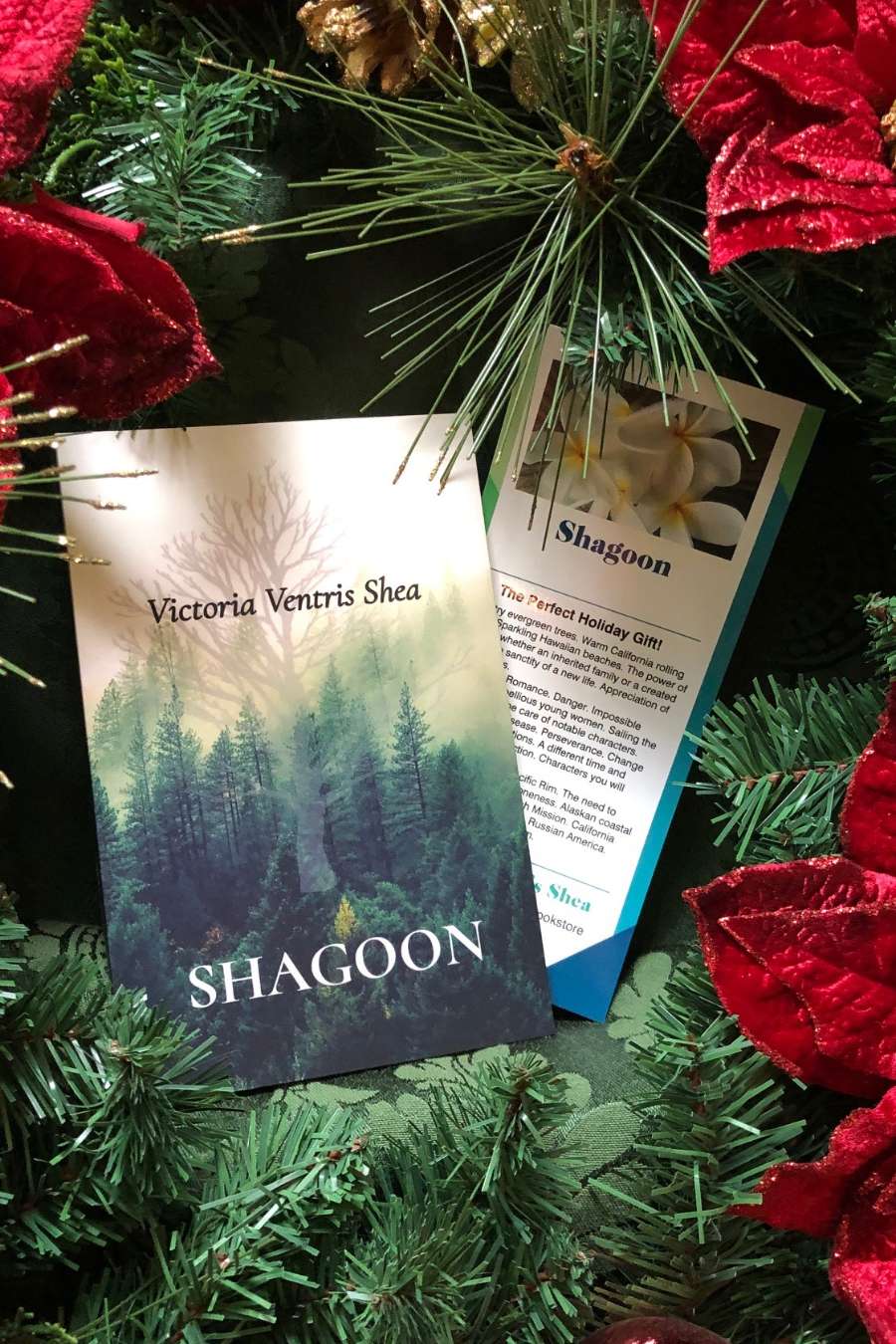 The need to belong . . . Even a newborn left in the Alaskan forest to die can change the world. Ana influences a Hawaiian queen and a Russian leader as she searches for her family. To be accepted, she must break away from the love of her life and from the safety she finds with Captain Vancouver. 18th century

At 14, the padres of Ana's Spanish mission unexpectedly send her to the Alaskan wilderness to serve as missionary. Shocked by nearly everything,  when she meets a steamy young Hawaiian who is returning home on ship, she becomes torn between love and duty along with the chance of finding her family.

Unprepared for life among the Tlingit, she gains strength through loss, disease, murder and death and learns about the spiritual influence of tribal heritage even as her People begin to interact with strength against the "Cloud Face Tribes."

SHAGOON begins in 1764 with Ana's determined young mother whose intense love for her warrior husband launches a cultural change for future generations.

Tight muscles quiver down her spine, telling her legs to run, but she predicts the attack it would provoke, the teeth, the tearing flesh. Her breath stops, ready to fight.

She jerks awake, buried, gasping for air, pawing with bound fingers at what covers her face, a tangle of her own filthy hair. A Spirit Dream. Her Spirit Dream, yet she tenses for Wolf’s bite . . . and she can’t escape, naked and trapped in her prison, her tiny cell where she’s to become a woman.

She grips the rail in a tight fist, standing exactly where Captain Vancouver had directed her to stand. Amid the harried activity and shouts of officers and crew and the flurry of gulls, she keeps her eyes attached to the shoreline and tells herself to breathe. In her mind, she relives Miguel and the soldier coaxing her onto the ship. She had frozen into stone, and they’d had to load her like a new calf, swinging her from ropes through air over the water! She thought she would die of fright or drown!

At Kealakekua Bay, Chief Kamanawa is the first to come aboard. “I remember you!” he says. “You left a story behind when you went away with Vancouver. You are the Girl Who Talks to Falcons and Heals! You were with the Red-faced Man Who Collects Grass and Cuts Off Limbs!’ he adds, grinning. He takes her by the shoulders and touches his forehead and nose to hers. “Aloha, E Komo Mai, welcome, Ana.”﻿

She smiles, tears forming in her eyes, remembering this place where she was welcomed, not knowing until now how important that time would become.

Fantastic story! I highly recommend this book—a wonderful mix of history and amazing challenges and beliefs of multiple cultures of the late 18th century Alaskan, Hawaiian and Californian people. I really enjoyed the story, characters and adventures! Can’t wait for the author’s next book. –Mike Roberts, Honolulu, HI

A great read! It took me on a journey of Ana’s life that stayed with me for weeks. This was as deep and wide as any grand river or fine Bordeaux. –Annie Burgess, Phoenix, AZ

I couldn’t put it down! If you are looking for a book that intertwines the history of Hawaiian royalty, Russian colonization and Catholic expansion with a complex story of romance and duty to family, this book is for you. I highly recommend it. –Carol Olsen, Spokane, WA

The author so skillfully weaves the reader through the complex, tragic, transformative life journey of Ana, a young Tlingit girl. The writing is so illustrative that it felt like I was reading a book and watching a movie at the same time. -JR One, Coupeville, WA